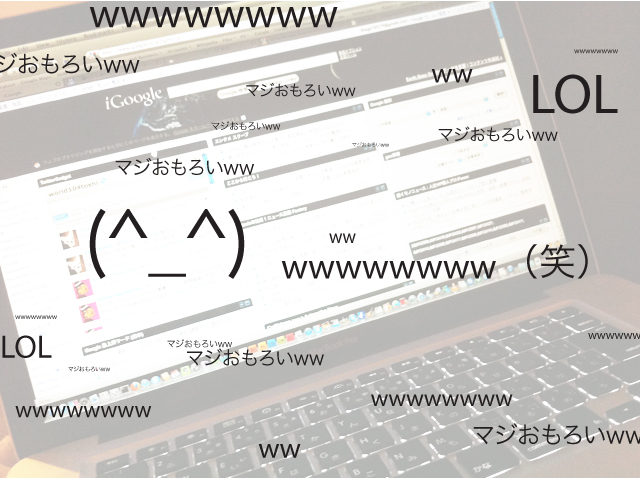 In Japan and around the world, there are countless unique ways to express emotion while typing using symbols or characters.

Many revolve around emoticons or emoji.

Others focus on Ascii art.

Then there are just the simple ones that we use daily.

One very common method in Japan is the use of the letter “w”.

“That was a great movie ww”

“You must be kidding! wwww”

“I know what you mean ww”

Well, it looks better in Japanese because it’s a bit easier to distinguish the w’s next to Japanese characters like this…

…well you get the point…

But what does it mean?

It means to Laugh.

Well, Japanese already use the kanji character “to laugh” (笑） as an emoticon/emoji.

Back into the early days of online gaming, when games couldn’t accept Japanese characters, early Japanese gamers had to text each other in English…

They would play games and chat to each other typing Japanese words in the Roman alphabet.

Of course, laughing, or “warai”, was one of the common terms.

As the action sped up, and gamers evolved, they found that they didn’t have time to type “warai” every time…

they shortened “laughing” into “w”.

The English closest equivalent would be “LOL”.

“w” is more a single laugh, but if you want LOL, maybe you need many “w” ‘s  or  “bw” or ”爆笑” literally meaning explosive laugh…

Also, try not to use “www” because many gaming nerds assume it’s your amateur mistake for the world wide web…

I must say however, that “w” is very convenient.